In January 1986 I undertook fieldwork in several regions of India. It was partly funded by the Indian Council for Cultural Relations and arranged by the Inter University Circuit for Indian Classical Music.

The funded part was spent visiting teaching institutions and meeting with some of India’s finest classical musicians.

I then stayed on another two months in India, for I was interested in researching the use of the bagpipe there:  this included the Scottish Highland bagpipe, which over two centuries was diffusing throughout the sub-continent and  which  was played in many Indian army, police and school bands as well as by itinerant musicians.

After Delhi my research took me to the foothills of the Himalayas (Almora district). In the sample below Dhani Ram plays a song in Chabeli rhythm, accompanied by  Kurwar Ram Das on a horuka drum. They were both  bhopas at the 3000 year-old temple of Jageswar near Nainital.  These Scottish pipes, obtained from Sialkot, Pakistan, were given  to Dhani Ram  in 1925 when he was 18 years old, by a British doctor, locally called Asis Maharaj, who worked at the Mithola ashram.

In Rajasthan I had arranged to work with Komal Kothari, the late Director of the Rajasthan Folk Music Insitute, for I also intended to research the indigenous bagpipes which had received rare mention in the scholarly press but were apparently still in use. I was also interested in other wind instruments several of which, such as the satara (end-blown flute), had double pipes so that drones could also feature in the music. We first met at a camp at Dungargarh in the Rajasthan desert where Komal had assembled a small team of expert musicians for the filming of a folk drama.

At Toliyasar temple we met and recorded father and son, Leda and Adu Ram (of the Nayak clan), bhopas of the God Bherav They played a very old type of bagpipe variously called masaq, mashaq or  bin baja for a variety of rituals. Here Adu  sings the beginning of a song for a night-wake ceremony: unlike his father’s double-chanter instrument, Adu’s had a rudimentary single-bore chanter, hence no drone is sounding.

Apart from ‘apprentice’ Adu, the other bhopas used short double chanters as in this hastily drawn sketch in my field notes.
At  home in Jodhpur Khomal had arranged for various musicians to visit us and we enjoyed many hours discussing and recording music.  This included performances of long epic tales  by the two  bhopas Sharvan and Bagwhan Nath (featured in the opening photo), as well as Adu and Leda.  They sang, chanted and recited to their own bagpipe accompaniments and one immediately appreciated the advantage of using a large bag with their short double chanters which needed little air, for then they could sing or recite for conveniently long periods without needing  to recharge the air supply as frequently as is necessary for most European bagpipes.

As well as exploring a variety of other wind instruments (such as (sarangi, pungi, satara and narh) and their playing styles and repertories –  performed by some of Rajasthan’s finest musicians – I was  invited to travel with them to a performing arts festival in Tilonia.

There, over the weekend,  I was also able to work with itinerant musicians playing the Scottish pipes. 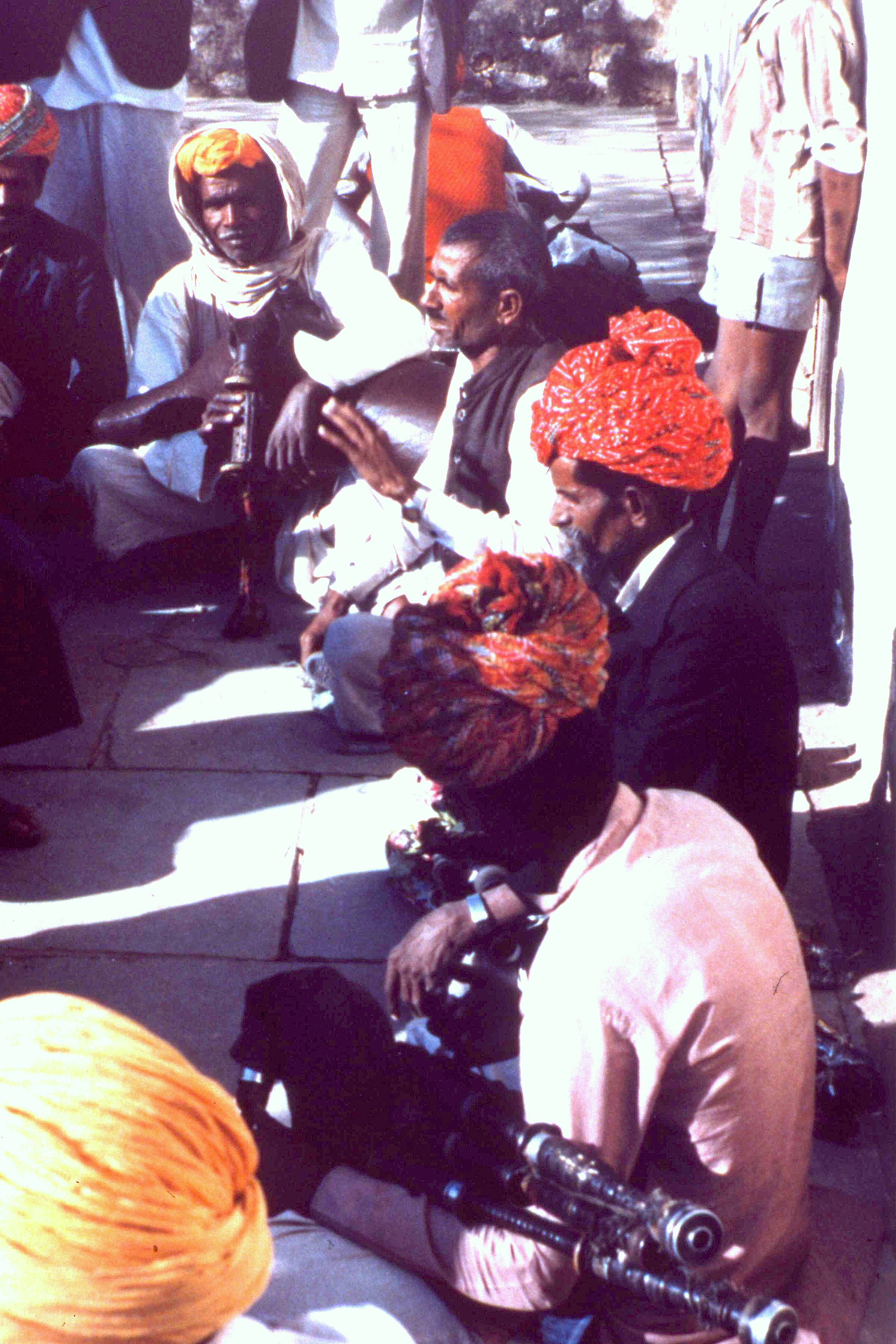 The wedding song Mehndi is well known in Rajasthan. It was usually performed  while a bridegroom is ritually dressed for his wedding. The singers jest with the groom and say how fine he will look, wearing his ritual headpiece, especially riding on a white horse. The groom in later verses replies that if he rides a white horse he may turn white himself, which would not do.

Instrumental versions of songs often contain lehara sections, i.e. repeated note patterns mixed in amongst repeats of the song melody. This abbreviated version by Karim Khan Langha illustrates the practice well while playing his satara (a double flute consisting of two independent tubes, one used to provide a drone). The D drone is quietly sustained throughout by circular breathing. An unobtrusive accompaniment was provided on a dholak by one of his two friends Multan and Chanan Khan. Karim did not wish to sing the text for me for me but his two friends  readily came forward to sing a few verses. (PCIN.27.1 &2). Though singing in a different key one can hear the similarities between phrases that they sang and parts of Karim’s version. 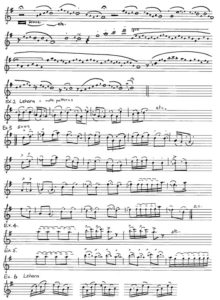 The colour of henna will be on you.        [sung twice]
[?] has gone to Gujarat
The colours of mehndi …? A beloved couple – a hair ornament –
Your spirit is in the ornament

Go, go, oh groom, we are telling you
You will have to ride on a very fine horse [twice]
You should have a fine white horse to sit on……. 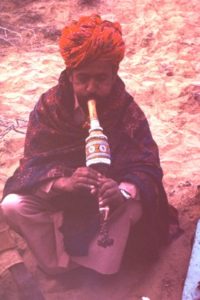 Karim Khan was also a highly skilled performer on his MURLI (often also called pungi) – a double-chanter reed instrument where the bell of a gourd is used as a mouth piece to help even out the air supply to a single reed in each of the two tubes. These are common instruments, possibly slowly giving way to the Scottish bagpipes because the latter do not need circular breathing and because of their visually impressive long drones. Karim’s performance here of the love song Chomaso began as is common both in Indian classical and folk music in  with a freely invented instrumental invocation.  When the song itself begins his percussionist friend enters playing his dholak.

Part of the prelude is faded out in this excerpt to make room for the opening phrases of the song.

The 46 tapes, recorded using a Stellavox recorder and Sennheiser microphones  during this research were copied for archiving at the Indian Archives and Research Centre for Ethnomusicology before I left India.  They are also lodged in the archives of  Edinburgh University’s School of Celtic and Scottish Studies.
Click here for my working index of recordings:  Indiaex
and here for a brief early article written for the magazine InterArts in 1987: Bagpipes in India