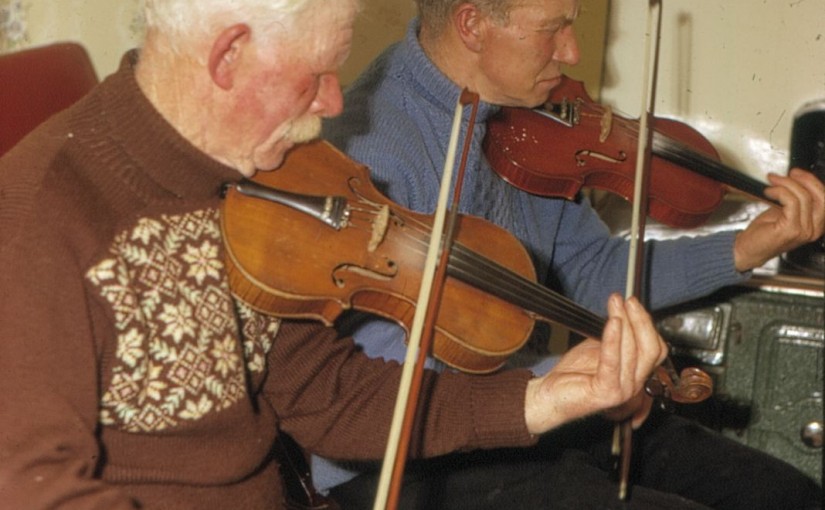 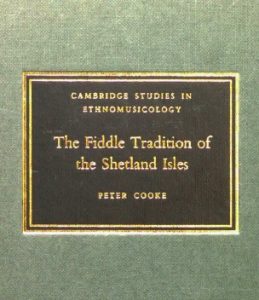 I may publish on-line my long out-of-print book on The Fiddle Tradition of the Shetland Isles (1986).
Scroll below for more information.

It was a huge privilege to be able to  research, publish and discuss with colleagues and students both my own  and their research into the many different musical traditions of Scotland during my teaching and research for the School of Scottish Studies (1969–1994). My early  investigation into  music-making in the Western Isles led to the production of a film of tweed waulking in the island of South Uist. I also decided that music in the Shetland Islands was one of the most under-researched of the Scottish regions  and immediately began to make frequent fieldwork visits there. One of the aims was to collect the data for a PhD thesis on the lively fiddle-playing tradition in these northernmost isles.

Two other enjoyable tasks were to investigate older styles of bagpiping and  the rich musical culture of the Scottish travellers.  This second task led to a partnership with the gifted traveller, the late Betsy Whyte, resulting in the publication of her autobiographies – two books now justly recognised as modern classics.

As a musician however, I was also concerned that the best of a huge store of music recordings accumulating in the School’s archives needed to be made publicly available and much of my time and energy, apart from teaching, went into working with colleagues to select and publish music itself rather than words about music. Hence the first item in the bibliography and discography given below features the Scottish Tradition Series (click). As of now, 2016, the series contains  27 issues, the latest entitled Sguaban à Tìr an Eòrna: Traditions of Tiree.

Since I retired a small number of the 1100+ field recordings,  which I made during my Scottish researches, have been placed online at the Tobar an Dualchas website.  I have also submitted over 300 colour slides for digitizing and archiving at the School of Scottish Studies featuring fieldwork, musicians and storytellers.

Editor – The Yellow on the Broom:

“Experiments in Fieldback in Shetland”, Studies in Traditional Music and Dance, Proceedings of the 1980 conference of the United Kingdom National Committee of the International Folk Music Council (ed. P Cooke), 1981 p. 47–51.

“Elizabeth Ross and the piping of John MacKay of Raasay” Proceedings of the Piobaireachd Society Conference pt. 1, 1985 item 3 and pt. 2, 1986. Published by the College of Piping, Glasgow.

The Fiddle Tradition of the Shetland Isles, (book and cassette)

Cambridge Studies in Ethnomusicology, Cambridge, 1986. 158pp. 60 music transcriptions and 34 recordings.  Click here to access it.
shetland-fiddle.  It will soon be hosted permanently by Edinburgh University’s School of Scottish Studies Archives along with mp3  audio recordings of all the music examples.

“The Pibroch tradition and staff notation”, in The Oral and the Literate in Music, ed; Tokumaru Yoshihiko and Yamaguti Osamu, (Academia Music ltd. ) Tokyo, 1986 p. 400–413. 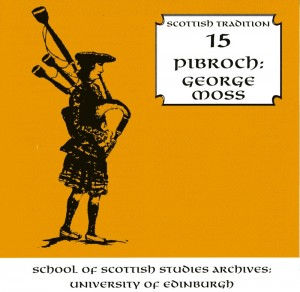 See also the blogs George Moss  and ‘What’s in a mode” on this site.