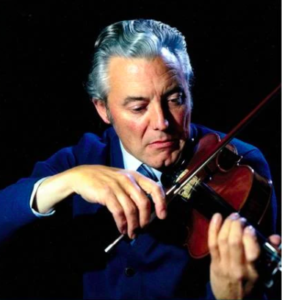 It’s 38 years since I spent a long weekend in Lerwick privileged be recording the violin playing of ‘Young’ Willie Hunter and his accompanist Violet Tulloch. On my return I posted a master copy of those fine sessions to the late Dave Bulmer of Celtic Music so that he could market an album entitled Willie Hunter. That recording, first issued as a vinyl LP in 1982 and later on CD, has very sadly not been available for years and Celtic Music folded a few years after Dave Bulmer’s death in 2013.
Sadly also Willie and Violet’s two later albums — Leaving Lerwick Harbour and The Willie Hunter Sessions were made when Willie was past his best as a fiddler: he died of cancer in 1994. Each time on later visits around the turn of the century I was asked by Violet and many more Shetlanders why the Willie Hunter record was no longer available. I had no answer for them and there was no indication that it would ever be re-issued.

But now here it is – some prime listening for you – younger Shetlanders especially!

Although I’ve had to compress the original files to Mp3 format, Willie’s sparkling virtuosic playing still shines through, along with the very musical support given by Violet at the keyboard. It’s a nice task to undertake when one is self-isolating, – mainly because of the Covid 19 virus and also because I spend a lot of time chair-bound after various illnesses and accidents.
On the back of the original album’s sleeve is an informative note, composed mostly by Violet and Willie. It runs as follows:-

1. The Duke of Fife’s Welcome to Deeside, Glen Grant Strathspey and The Gladstone Reel.z

The Strathspey, sandwiched between two of James Scott Skinner’s tunes, is by Peter Milne (1824-1908), otherwise known as ‘The Tarland minstrel’.

2. John Roy Lyall – The Modest Fiddler – Billy’s Welcome to Canon Park
Eddie Edmond – a band leader in the north east of Scotland in the 1960s-70s composed this first air to his father-in law. Arthur Robertson’s The Modest Fiddler refer’s to Willie’s father while the third tune as mentioned earlier commemorates to the birth of Willie’s son.

3. The Lament for Will Starr – The Young King

Angus Fitchett played in  a trio for some years  with Will Starr, a consummate accordionist and band leader who died in 1976. In contrast The Young King is one of Scott Skinner’s lively hornpipes.

One of Ireland’s all-time stars who visited Shetland  more than once.

Shetland has long had close connections with Cape Breton, musically as well as in other ways. The first two  tunes are the work of Dan R McDonald (1911-1976) – ‘Danner’ –  one of Cape Breton’s best known musicians.  His widely popular Trip to Windsor  can be found in the collection of that name, published by John Donald Cameron in 1994. The Heather Hill Collection (1985/2000) is home for the other two tunes. Several Devil’s Dream tunes are known to exist  including one in Thomas Wilson’s 19th century Companion to the Ballroom while Willie’s tune in the Heather Hill  Collection, bears the title The Devil’s Delight  ‘arranged by the Scots fiddler J. Murdoch Henderson’ whom he met during visits to the Scotland and who gave him some lessons. My thanks go to the American fiddler/researcher Dr. Paul Wells for help in clarifying the sources of these tunes.

Scott Skinner composed all three of these testing pieces.

9. Mr Michie – John Pottinger’s Compliments to Ronald Cooper – The Rocket
Mr Michie is one of Angus Fitchett’s marches, first published after this record, in 1988. Apparently John Pottinger only wrote one tune, but as one reviewer has written “what a cracker”! The Rocket was written in 1773 in the Complete Collection of Favourite Country Dances where it is labelled Anon.

The first piece is Tom Anderson’s best known slow air. The other two pieces are the work of Scott Skinner who delighted  in writing and playing ‘Scotch Snaps’ whenever suitable, as in Happy Tom.

The famous south Uist musician Seoneid Rodein, otherwise known as John MacDonald,  Pipe Major of the Glasgow City Police Pipe Band, wrote the first. It’s a classic among pipers, but one which fits the fiddle extremely well. The other two tunes are from Scott Skinner’s pen – The Iron Man being from a manuscript dated 1923

13.The Dying Year – The Autocrat – The Dean Brig Reel

The Dying Year is the work of J.D, Michie who wrote it in 1935 , dedicating it to Angus Fitchett. Willie Hunter learned the other two from Angus’ records. The last named was composed by ‘The Tarland Minstrel’, Peter Milne  (1824-1908). He was an associate of Scott Skinner and at times a theatre musician. It was published in in Middleton’s Collection of Strathspey Reels