Music Education.  My working career began at a number of secondary schools including heading the music department of Withywood Comprehensive School, Bristol before moving to Redland College of Education as a lecturer in music education.

Ugandan music.  This dates from when I took up teaching posts in Uganda in 1964, firstly at Makerere College School and then as head of the music department of the new National Teachers’ College (now Kyambogo University).

Scottish music.  Returning to the UK in 1968 I taught for a year at Moray House College of Education, Edinburgh, before taking a post as senior music researcher and lecturer in the School of Scottish Studies at the University of Edinburgh.

Archiving. My Scottish research was closely linked to the archiving work being done at the School of Scottish Studies. There I also took on responsibility for organising the  John Levy archive.
Scottish and Indian fieldwork recordings are archived in the School of Scottish Studies and some of the Scottish material is also available online at the Tobar an Dualchais website.  Over 1300 of my African field recordings are available in the sound archive of the British Library (BL Sounds).
Other archiving experience is listed below.

CURRENT AND PAST ACADEMIC POSITIONS

1998–2016 – Hon Research Associate at School of Oriental and African Studies, London where I give some occasional post-graduate supervision and undergraduate teaching.

June 2006–present –  Visiting Academic  in the Institute of Advanced Research in Arts and Social Sciences in the University of Birmingham.

1998–2011 – Part-time Lecturer in Ethnomusicology  at the University of Birmingham. 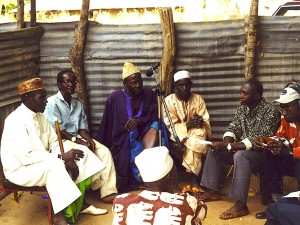 Consultant for a World Bank funded project at the Gambia National Museum, Research and Documentation Centre – refurbishing its archive and retraining its staff.

2000–2001 – Part-time lecturer (ethnomusicology) at the University of Sheffield, department of music.

2002 – Consultant to the Royal Scottish Academy of Music and drama, Glasgow. A six-month pilot project for an on-line sound archive.

1994–July 1995 – Professional Assistant – for the National Museums of Scotland, digitising and archiving the Jean Jenkins Collection of field tapes and documents.

1989–1994 – University Fellow at Edinburgh University School of Scottish Studies following early retirement in September 1989  and requiring that the Autumn term of each year be spent in research and teaching.

1989–1995 – Part-time lecturer in Practical Ethnomusicology and Scottish Music, at the Royal Scottish Academy of Music and Drama, Glasgow.

1969–1989 – Lecturer, later Senior Lecturer and head of Ethnomusicology Programme, University of Edinburgh, School of Scottish Studies. This involved extensive fieldwork throughout Scotland as well as teaching all aspects of musical folklore. I also initiated the teaching of ethnomusicology in the Faculty of Music and supervised numerous post-graduates in successful Master and Doctoral work in both departments.

1964–68 – Teaching in Uganda   firstly as head of music at Makerere College School then as director of music at the  the newly established National Teacher’s College, Kyambogo.

A brief listing of general publications

Editor: Studies in Traditional Music and Dance, Proceedings of the 1980 Conference of the UK Chapter of the International Folk Music Council, Edinburgh, 1981

Author: ‘The violin – instrument of Four Continents’. Chapter in The Cambridge Companion to the Violin the Violin, ed.: R. Stowell Cambridge 1992

For other articles and books etc. click in the menu for Africa, Scotland. . .