Here are a few tunes I recorded on cassette back in 1970 of Cramond school’s recorder group which Di Cooke was teaching  during the period 1969-70.   Cramond Primary is a small school just above the slopes to the River Almond, on the north side  of Edinburgh city.

It was a shame when Di’s teaching the was stopped later, all because of a local government dictat that instrumental music teaching was to be cut from the school curriculum to save money.  Although Di was happy to continue teaching there for free, the powers that be decided that to allow her to continue thus would be invidious for other schools.

Di always began by teaching the children to find their way around the instrument, how to finger it and then to learn some simple tunes (mostly Scottish) without recourse to notation. Like me she considered that learning by rote was good for teaching young players (and older ones too) to listen and to develop their musical memory. I suspect the children learned this first tune without recourse to music notation.

Words by Robert Burns (his third version) using a tune known as The Caledonian Hunt’s Delight (by James Miller c. 1790). 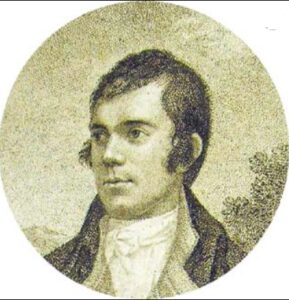 I don’t know where Di and her school got hold of this fragment – for fragment it is according to Robert Chambers in the 11th volume of  his collection of Scottish Songs (published in Edinburgh 1829.) The usual song indexes don’t list it.  One other version was reported on by Charles Finlayson (b. 1790) along with  lines of different verse.

The children sing Chambers’ words:- “My love’s bonnie, bonnie bonnie, My love’s bonnie and fair to see, And aye when I think on her well-faured face, Then in her company I would be.”

First published as a reel in 1757 by Robert Bremner in his Collection of Scots Reels  it is the tune for an old ballad which various song makers haven used.

This tune was also used as a pipe band march by several English regiments who knew it as “We’ll gang nae mair…”.  An old military friend Col. David Murray gave his explanation of the title:-
Soldiers were not popular in Victorian England—except, sentimentally, when engaged in fighting far away—and the title of the march might well have found an echo in the hearts of the soldiers as they marched out of an unpopular station where, perhaps, the people were unfriendly, the girls unapproachable, and the publicans hostile.

Another presumably 18th century Scottish song, if not much older. It is sometimes claimed that this was one of Robert Burns’ songs but it was in fact by a contemporary poet, Isobel Pagan. Go to Wikipedia with this title if you want the whole story.  Both their versions of this sad lament begin with this verse:-

Definitely not Scottish, but of Caribbean origin which became popular as a calypso during the 1950s! The earliest version was a 19th century song from Haiiti was called Choucoune

“Yellow bird, up high in banana tree. Yellow bird, you sit all alone like me. Did your lady friend leave the nest again? That is very sad, makes me feel so bad. You can fly away, in the sky away. You’re more lucky than me”.