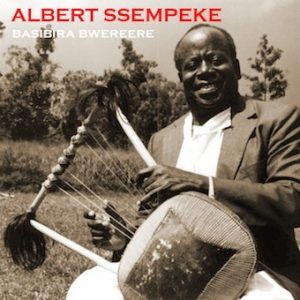 Albert Ssempeke was not only a gifted musician with a deep knowledge of the music of the royal court of the king of Buganda but also a patient  teacher from whom I, my son Andy and many students were privileged to learn  much about kiganda music. When working in Uganda during the 1960s I knew little about Ssempeke other than obtaining a few recorded items performed by him at a concert in the Uganda Museum, but after my return to Uganda in 1987 we became good friends and I benefitted enormously from his willingness to share and discuss his great musical knowledge and ability.

The following early account is little known and deserves re-publication.

The Autobiography of an African Musician

——————————–
Footnotes
1 The palace and the enclosure that is the residence of the Kabaka, the hereditary leader of the former Kingdom of Buganda. [return]
2 flute ensemble. [return]
3 “My Friend.” a common form of address of some familiarity or kindness. [return]
4 An exclamation of amazement. [return]
5 A topical song about a Mr. Bamutta, who had started a Farmer’s Cooperative but failed. One version of the song goes as follows: Bamutta, you have seen. You ran out of money. When he checked the Bank. He was left with four hundred. [return]
6 Ssempeke sang these syllables at the following approximate pitches:
to = A,
lo or ro = B or C,
le = D,
li and liri = F or G.
lero = D-C.
Actually, the syllables used were only to, lo, le and li, the letter r being accounted for by the Luganda rule that l becomes r after the vowels e and i. [return]
7 A one-stringed bowed lute. [return]
8 A respectful term referring to the Kabaka: something like “His Royal Highness.”, but literally “the father of men.” [return]
9 Literally “treasurer of the villlages.” an official in the Kabaka’s treasury. [return]
10 Literally “Ooo, you are here.” [return]
11 Equivalent to “Sir”. [return]
12 Kisanja is a period of service in the Lubiri, perhaps six to eight weeks at a time, fulfilled in rotation by the court musicians. [return]
13 An exclamation of astonishment mingled with encouragement. [return]
14 A designation of one of the several sub-districts in the county. [return]
15 Literally “drummer”, however, the term refers here to an ensemble of bowed lutes, flutes, a lyre, and drums. [return]
16 A famous group whose recordings were best-sellers. [return]
17 A bowl lyre of eight strings. [return]
18 The word used here by Ssempeke is obukujjukujju, which implies craftiness in addition to skill. [return]
19 The word here translated as “tuning” is the Luganda omuwanjo. It is much used by musicians: sometimes it refers to something like “scale”, and in this context more specifically to the interval of the octave. [return]
20 Ssempeke uses the complex verb form gyenagituningamu. The loan word “tuning” is clearly recognisable. Ssempeke uses yet another phrase in this sentence – okugirega amalobozi gayo, meaning in this case to stretch the strings to the right pitches. The ennanga is especially difficult to prepare for playing on account of the timbre devices: there is one for each string, and each must be adjusted frequently. [return]
21 Literally “Oh God” [return]
22 Muyinda, a Kabaka’s musician and expert on many instruments, was chief demonstrator of music at the Uganda Museum. [return]
23 A “free key” xylophone of twelve keys tuned in an approximately equidistant pentatonic pattern. [return]
24 A feast, generally, but understood more specifically as a wedding party. [return]
25 A dance rhythm and form specifically Kiganda. [return]
26 The three terms designate members of a traditional drum ensemble, each with its own characteristic timbre and musical patterns. [return]
27 Literally “my friend”. [return]
28 Side-blown trumpets played as a set in hocket texture. [return]
29 Literally “The battle of Ensisi”, a well known song. [return]
——————– 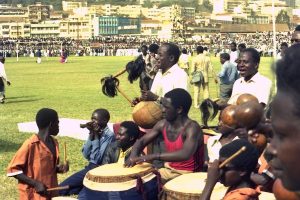 Ssempeke (playing his lyre) and his group of wedding musicians – welcoming Ronald Mutebi, the Ssabataka (heir to the Buganda throne) on his first return from exile in London.  Taken at Nakivubo football stadium 12th September 1987.

Albert (playing  his lyre) is lead singer in this semi-professional group which later that evening drove away to play at a wedding at Bukoloto village some 70km from Kampala.  Ten items recorded during this visit are available at BL Sounds (search the site for ‘Ssempeke’ and then down  the ‘Date’ column). 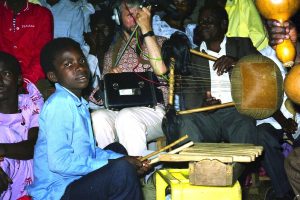 The youngest member of the group played a small amadinda. 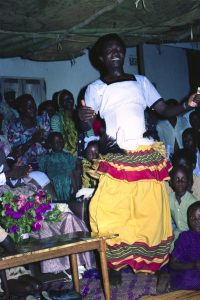 Scenes at the wedding.

1988
While revisiting Uganda in 1988 I met with Albert again and invited him to come to Edinburgh to live with us for a semester and to teach at the university’s music department with me.  He was an inspiration to all who worked with him, including especially my son Andrew.  Some 62 audio items resulting from this visit are available for listening  online at BL Sounds (London) and at Makerere and Kyambogo universities,.  They include a series of important songs associated with the court of Buganda.  He also took advantage of the music department’s studio facilities to multi-track a series of items later assembled for two CDs (Ssempeke!) and, in association with Andrew and me, the teaching pack (Play Amadinda).  Both are still available  if requested of me.

The following 33 songs  were recorded by us during 1987-88 and can be heard by searching the BL Sounds online facility or at the Makerere and Kyambogo University libraries. You will find texts and translations of some of these songs here:  Ssempeke! 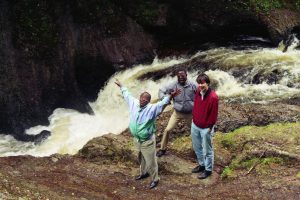 Fun on a visit to the Scottish highlands, with son Ssekitooleko and Andy Cooke.

Further meetings with Ssempeke during 1992, 1993 and 1994  resulted in another 14 items including some extensive discussions on his repertory..

Eighteen minutes long, this film presents a number music and dance genres genres with Ssempeke performing on a variety of instruments.  The final two and a half minutes feature  him playing his ennanga (harp), as he sings the famous song Ssematimba ne Kikwabanga (discussed in my blog on Evaristo Muyinda).