I’m delighted to share with you  Mairi MacArthur’s ‘Memories’ of her friendship with Betsy and with Betsy’s many associates.  I was researching in Uganda when Betsy died so had no knowledge of Betsy’s last days nor of her funeral so I find the last part of this account especially poignant.

E. Mairi MacArthur is a researcher and writer, with a longstanding interest in local history, folklore and song. She was brought up in Fife, where a few of Scotland’s first folk clubs were founded, but older family links were in Argyll. In the 1980s, as a postgraduate in the School of Scottish Studies, she undertook a thesis on the people’s history of Iona. She is pleased to be back in touch with Peter Cooke and, through him, to get to know David G. Pullar, great-grandson of Betsy Whyte.

An early memory of Betsy Whyte was talking with her in that flat, over a cup of tea and along with singer Alison McMorland. It must have been during the Edinburgh Folk Festival, when Alison was regularly paired with Betsy for story and song events and they were given B&B together in the city.  That was my first meeting with Alison and loyal friendship with both women sprang from that cuppa; but I already had two vivid memories of one of them from a little beforehand.

The first was on TV in 1979.  On a visit to my parents’ home in St Andrews we watched an arts programme where writer William McIlvanney conversed with a modest, engaging Traveller woman about her childhood in the open air of Angus and Perthshire, vividly captured in a new book The Yellow on the Broom. 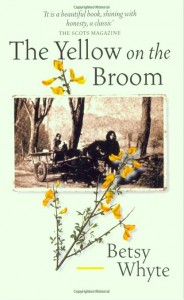 I went out and bought a copy straight away.  Many Travelling people had worked or settled in parts of Fife though I don’t recall seeing them in my own childhood. But my father, as a boy on the island of Iona, used to talk about the arrival by boat each summer of a Traveller family. His father would give them a place by the shore to camp and enough potatoes for their stay; the islanders were glad to buy tin pails and other wares; local kids loved to sit inside the tents and compete with the visiting children in the races on school sports day.

Two years later, a mutual friend took me to a house in Montrose and the same smiling face welcomed us in to a fireside where, later, I would spend many cheerful hours. Bessie, as she said to call her, told stories and riddles and both she and her husband Bryce sang in a lovely, natural style. Sister Katie often dropped in, adding to the music and fun, as did a relative called Mary and her husband Henry, who had great music-hall songs. There was always good company and lively conversation.

Also around 1980/81 I had got to know Duncan and Linda Williamson, after they had moved from Argyll to Kincraigie, a cottage near Strathmiglo. Several times I met Bessie and Bryce there, honorary grandparents to young Betsy and Tommy Williamson. And there were lots of other occasions in or near Edinburgh, for example when Bessie would come to talk to students at the School of Scottish Studies where, by 1986, I was myself doing part-time research.

On Friday 12th August 1988 I drove over to Fife, to stay for a night at Lizziewells on the outskirts of Auchtermuchty, where Duncan and Linda were by then living.  It was the weekend of ‘Muchty Festival which, since it began in 1981, had quickly become a favourite annual outing – a community event with song, story, music and blether in congenial small halls and bars, around a village square ideal for open-air dancing.

That year I could only be there for one night as I had to go and see my parents, retired near Oban, the next afternoon.  The ever-hospitable Lizziewells house was full, inside and out – [Travellers] Willie and Bella MacPhee and Belle Stewart were staying there, as were assorted musicians, and Bessie and Bryce had brought their caravan. An early evening concert was great but I decided to skip the later session and returned to the house, rolling out a sleeping bag on the sitting-room floor ready to doze off.

In another corner, however, three worthies were making their own entertainment: Duncan, Willie and Bryce spent the evening yarning, joking, singing, making faces at each other in a wild and wonderful ceilidh all their own. They ignored me entirely which was perfectly fine; it was great just to lie there and listen.

Eventually everyone else returned. Bessie came to the sitting room door.As I got up to say goodnight, she asked if I would sing to her. I was one of many who, from her contribution to The Muckle Sangs record, had learned the words of Young Johnston – a ballad of passion and tragedy from her mother Maggie, herself a Johnston.

I havered a little at first, wondering if maybe we would all be more rested in the morning? But – gently – Bessie made it clear that, before going to sleep, she wanted to hear The Rue and the Thyme.  So I began. She joined in quietly as the verses drew to an end and then said: “Good, the song will go on”.

On the Saturday morning I went in early to ‘Muchty to listen in to some of the competitions. By lunchtime I was ready to leave and sought out a small group from Lizziewells, including Bessie and Bryce.  We said good-bye in the square and I added that soon, hopefully, I might have a chance to get to Montrose again. Usually Bessie would reply with her characteristic encouragement to be sure and visit. But she said nothing at all, just pulled me back for a long hug.

In my Edinburgh flat, someone I was giving a lift to turned up and, just before setting off for Oban, I handed him a copy of The Yellow on the Broom which I had promised to lend.  It was just after 4 o’clock.  The next day a phone call came from Auchtermuchty with the hugely upsetting news that, in the middle of Saturday afternoon, Bessie had gone to the caravan to lie down and suffered a fatal heart attack. I could only imagine the shock and sadness rippling through the festival and, especially, the devastation that overwhelmed Bryce and all at Lizziewells.

At the funeral Bryce and family greeted with great courtesy those of us from the world of song and folklore who joined relatives and townsfolk in a simple, dignified service.  Some weeks after that I did go to Montrose again, mainly to visit Bryce and just chat for a while. On the way out of town I suddenly remembered where Katie lived and dropped by, hoping this would not be an intrusion. But she was really pleased to see me and to talk about a much missed sister whom, she pointed out, she had known all her life – longer than anyone else.

In August 1989 I drove again over the Forth for the ‘Muchty Festival. There was to be a storytelling session dedicated to Bessie’s memory and Bryce had come for the weekend.  During the Saturday I was hailed by Hamish Henderson in the village: “I want to go to Linda’s” he said. I gave him a lift to Lizziewells where, at the kitchen table, he joined Bryce, Duncan, Willie and Bella MacPhee for the rest of the afternoon.  Linda and I hovered over teapots in the background as they exchanged stories and reminiscence, quietly and affectionately.  At one point Bryce said that he liked to go to the cemetery and talk by the headstone, as if to Bessie herself; at once Hamish added: “Talk to her for me too the next time.”

Bessie was a good person to talk to, her words sometimes direct but always thoughtful, sympathetic and often prescient….   Much later a friend sent me a photo of Bessie at the festival on the night before she died; though in a crowded room, she still held an outdoor jacket tight as if maybe she felt a little unwell.  I don’t know that anyone can know for sure when their time will come but Bessie did seem to sense that she might not have the chance to see or speak to certain people again. For me there was the request for that song and the silent hug in the square. And a student told me of a phone call just days before that weekend, to thank Bessie for agreeing to help with a topic she was studying; there was no hurry so a later date, perhaps in Edinburgh, might be a better time to talk. But Bessie was firm: that moment, on the phone, was when she wanted to tell the student all that she knew.  And so she did.

“Betsy, your words were the wisest of all…” is the first line of a song by Sheila Douglas, called Rowans and Honey after the title of Bessie’s second book, published after her death. Sheila and her husband, along with Belle Stewart, were also in that festival photo, and beside Bessie was Adam MacNaughton.

Adam’s song The Yellow on the Broom took words and images directly from the book’s pages, as did Duncan Williamson when he composed three lovely verses for that book launch, beginning: “Come sit beside me, Maggie lass, I hate to see your gloom, For I will tak’ you on the road, when the yellow is on the broom”.  And Brian McNeill pictured Bessie’s father pearl-fishing in the Isla Water for When the Laverock Sang in the Morning. That’s four Scottish songwriters, no less, all inspired by Bessie’s books.

It was a pleasure and a privilege to know Bessie and Bryce Whyte for those few years.  I think about them with appreciation and great warmth. And I still often hum or sing  as I go about our house.

Betsy’s text for     The Rue and the Thyme

I am a poor simple maiden, my fortune’s been bad
For years I was courted by a bold sailor lad.
Imagine  my sorrow, my grief and my pain
Since he’s now gone and left me, he’s left me alane.

He wrote me a letter for me not to mourn
I sent him an answer I could do my own turn
I could work or sit idle as occasion suits me
Take a rest when I’m weary, saying ‘Farewell to thee’.

He sent me another with the red rose so fine
I sent him an answer with the rue and the thyme
Saying keep your love letter and I will keep mine
You write to your new love and I’ll write to mine.

Oh I’m not awaiting on some better chance
I’m not awaiting my fortune to advance
Nor am I intending for to hold you in store
But I’m here come to tell you that I love you no more.

So you keep the rue love and I’ll keep the thyme
You write to your new love and I’ll write to mine
It’s no use lamenting for what might have been
It’s and auld and true saying that a new broom sweeps clean.