The above title gives  just three of the names used in Uganda  for that class of musical instrument known as Lamellaphones.  Search for lamellaphones on Facebook if you wish to see a variety of instruments from elsewhere in Africa. In Uganda they have been popular throughout northern Uganda having probably travelled there in the hands of singers and porters from further west in central Africa. They are also played in much of eastern Uganda. As in the picture above Ugandan instruments are usually box-resonated and carry  a variety of lamellae and tuning arangements.  The lamellae are often fashioned from bicycle and motor-cycle spokes, hammered flat and shaped wider at the plucked end.

In both Lango and Acholi  I met and recorded lively, well-practised groups of youths in 1968 and more later when I revisited northern and eastern Uganda in 1997.during the 1990s relative peace was returning again in Lango after the downfall of Idi Amin and the routing of John Kony’s rebels.

This group recorded the following  song for me. Entitled ‘Prayers’ it is usually the first song played by many groups whether for rehearsals or for  performances. The group lived in and around Akangi Ogur, 9 miles from  Lira town on the Apala road. 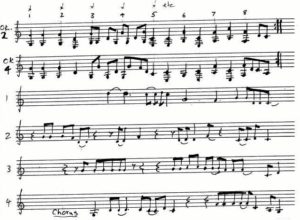 The first two music lines give the opening phrases played on two different okemes: they are followed by the opening lines of the singer. His text begins as follows:-

Ee, atin acel yia yom ayoma     Ee, miya bunu tam iyi Uganda
Ee, as an only child I am happy.    Ee, share with me your thoughts on Uganda

Ee, atin acel yia yom ayoma      Wuleg wunu Obanga
Ee, as an only child I am happy.    Seek the blessing of God

The okeme is also favoured by older singer-poets to accompany their often solo performances that comment on social conditions and behaviour, as well as give advice on such matters as health.  One of the best known and respected of such poet-bards was Julius Ekukha. He can already be heard on Facebook singing the song Cilim advising about  Slim – a Ugandan nickname for the Aids virus , which was afflicting the whole of northern Uganda in the 1990s.

Here with his song Dongo Lobo (Developing Uganda) he warns listeners against having any thoughts on continuing resistance to the central government and advises them to work more to develop their region.

My musical  transcription begins with the basic okeme line followed by the opening utterances.  Pitches are approximate. 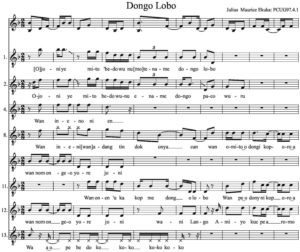 Districts like Busoga, lying just to the east of the Nile where it begins its journey north from Lake Victoria, are populated by mainly Bantu speakers whose name for lamellaphones make use of the ndongo root – hence endongo and budongo which links them to harps and lyres  which have similar resonant sounds.

In this region bands of mainly lamellaphone players are rarer than mixed ensembles. A lead singer frequently plays a small budongo  with possibly one or two others budongo players.but such teams may additionally contain one or more flutes, a fiddle or two, rattle, drums and often a xylophone  (embaire).

Biansi Mata, was a renowned blind singer in southern Busoga.

Here too are his team’s  instruments, while they take beer together from a large calabash via long straws. 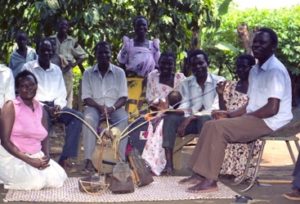 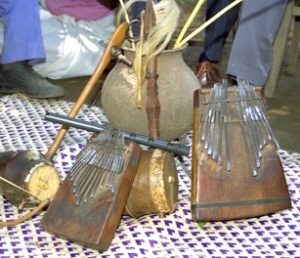 Otabona bukaire.  Is one of Mata’s best known songs. I’ve shortened it for he begins with just his endongo accompanying his singing and it is several minutes before the two fiddles join in followed by a flutist near the very end. You can hear the compete performance on the CD Ouganda: Ensembles villageois du Busoga – Uganda: Village Ensembles of Busoga or search  BL Sounds for Mata

Silagi Kirimungo’s group like many other teams in Busoga is much larger, featuring enkwanzi (panpipes), flute, fiddle, drums and embaire [xylophone]. Silagi himself plays a small budongo which can hardly be heard while he sings accompanied by his team. 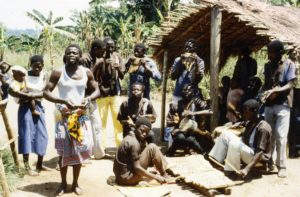 As usual in such songs as this one – Enhonhi kulujo – his budongo leads the way but then is virtually drowned out  – even when no xylophone or drums are used. The complete performance lasts 8 minutes – if you want to hear it all along with others recorded in 1990, search  BL Sounds with ‘Silaji’ or consult the CD –  Ouganda: Ensembles villageois du Busoga/ Uganda: Village Ensembles of Busoga. VDE Gallo AIMP CD 926 (1997).
Texts and translations of other of his songs on the tracks can be downloaded here:- sogaCDtexts

Lying to the north of Lango and adjacent to southern Sudan, this district suffered more than almost any other from the various troubles following the coming to power and later defeat of Idi Amin and later again John Kony.

As in Sudan numerous village groups once flourished.  A respected leader Amone Wat Mon was forced to abandon his village near the Sudan border and settled in Kampala, Uganda’s capital.  Numerous other internally displaced young Acholi subsequently came to  Kampala, many of them sleeping on the streets, while others were forced to resort to begging and petty crime in order to survive. Wat Mon decided to gather together a group of these youngsters and form a group which taught them the artistic skills in music and dance of their own  traditional Acholi culture and to display it initially to southerners living around Kampala. From such performance proceeds many youngsters were enabled to pay fees to attend school and college. Equally important was the pride they gained in their own Acholiness.

I made many recordings of Wat Mon’s  leading trio of likeme players who were often accompanied by another sounding a flat metal raft rattle.

The second song which I recorded was a sad one about the troubles in Acholi – TooPaco (the death of our homes).

At a concert outside Wat Mon’s Kampala home his okeme team led a group of dancers into the arena where they played for some 30 minutes until it was dark, while the women entered carrying a pot on their heads. They  subsequently added more and more until some of them were bearing 6 pots – dancing all the while. The audience of locals and guests appreciated this finale to a varied concert which lasted over three hours.

OLYAK.
When playing for competitions the okeme group often  introduced itself with the following song –  a kind of boasting song.

Adunu mon bulu lak ki nyinga,  jal can balu gitino na,
That girl becoming woman of good shape and young adults are going with my name , friend, poor one who is spoiling my name

Anyaka ma okweri pe ipar bene min boy odong gang adok dong aneno wange,
That young girl who refuses you, don’t mind,  mother of my boy, she remains at home.  When I return I will see her face

Anyaka ma okweri pe itam bene min boy odong gang adok dong aneno wange
That young girl who refuses you, don’t fear,  mother of my boy, she stays at home.  When I return I will see her face. …………

Wun ocere ikom Watmon dano ma okwanyo nama, en aye telo wiwa dani ma oloyo
You people, don’t joke, the one who will take number [one]  is the one leading us

Jal Jokany balo  nyinga abala do wun uwek bura wan wabino me gamo nama
My friend, people from Jokany are moving around in my name, we come here to get number [one]

Jal Jokany lak ki nyinga do wun uwek bura wan wabino  me gamo nama
My friend, people from Jokany, ?? are moving around in my name.  We came here to get number [one]

Jal Jokany ru ki nyinga ba wun uwek bura wan wabino me gamo nama
My friend, people from Jokany, from dawn to dusk are moving around in my name.  We came here to get number [one]

Adaa awobe bak mac wan dong wabino do coo wa ki mon, kwany tong wan wabino me  game nama
You boys, make a big choir, we are ready here coming ?? Many men and women get spear, we came here to get number [one]

Wagoyo kalulu weng kakini, anyaka wan wakwedi wabed piny ba
All of us are playing all down [close to the floor between the feet], girl us sit down [request]. –    [kacini is a Swahili word]. 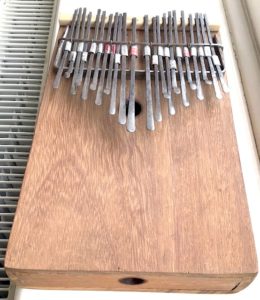 Following the arrival into Uganda of so much Congolese and other popular guitar music styles many musicians began emulating them on lukemes.  Extra keys were needed  to complete the diatonic scales and to be able to copy the styles of the lead guitars and the range of the instrument was extended by inserting an extra row of short keys and bending their ends upwards so that they could be plucked without disturbing the longer keys.

No traditions remain unchanged and the same widening of the melodic range of lamellaphones is also occurring in the case of arched harps, often celled ennanga, which are becoming increasingly popular as ensemble instruments throughout much of Uganda and mostly emulate Zairwa and other popular music styles. They are a topic for another blog.